1. The dredging contractor is currently finishing up portions of West Bay before doing some equipment maintenance and moving up to White Oaks Bay next week. They are currently focusing on doing portions of the Nippersink Creek inlet to improve lake access for those landowners. This is also where the amount of rock and gravel being dredged is hardest on certain parts of the dredge pump equipment. As they have those replacement parts ready to install, they want to get as much use out of those parts to be replaced as possible. They are planning to replace those parts early next week before moving up to WOB, which they still hope to have completed by the 4th of July.

2. Any remaining unfinished areas of West Bay / Nippersink Creek inlet will be completed later in the summer.

3. The dredging contractor plans to temporarily move the dredge and pipeline back into West Bay for the 4th of July to facilitate holiday boating.

4. While it is impossible to specify an exact date and time when the dredging will be done at a particular location on the lake, the MPOA is working closely with the dredging contractor to try to minimize inconvenience to shoreline landowners and lake users to the extent possible. Lakefront landowners whose access to the lake may be temporarily blocked by the dredge / pipeline may wish to temporarily find other boat mooring locations beyond the immediate dredging work area.

5. No matter how the contractor proposes to schedule the work, there will be those who feel they are being unduly inconvenienced. All we can do is ask for folks to look at the big picture (a clearer, deeper lake), and be patient.

* Minus sediment volume just removed from West Bay in Spring 2015

Note: All dates are APPROXIMATE. The above Estimated Dredging Schedule and Timeline will be revised as the project progresses; Updates and Schedule Revisions will be provided via MPOA office and website.

The dredge pipeline and designated boat crossing locations will be clearly indicated with lighted buoys and reflective markers; no-wake boating is required at all times within close proximity of the dredging areas, dredge pipeline, floating turbidity curtain and other equipment. 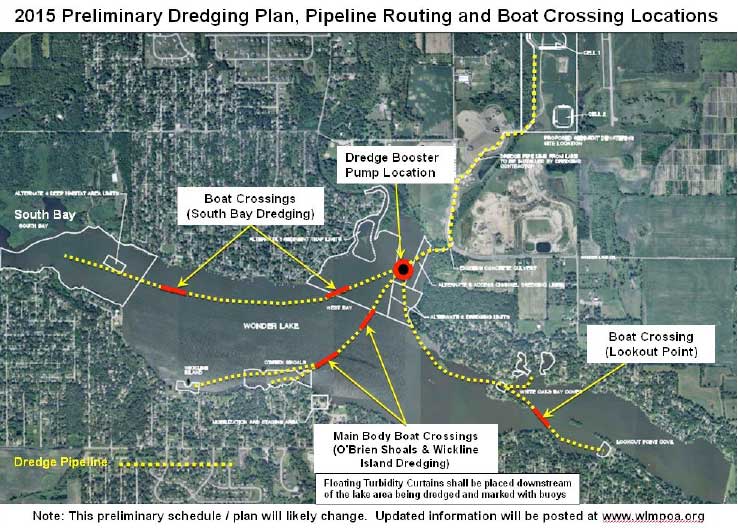