Lake Drawdown Update – October 2, 2019 — Though it may not seem like it to anyone currently looking at the lake, the Wonder Lake drawdown has begun. In late September, the sluice gates in the dam were opened slightly to gradually start bringing the lake water level down to the dam spillway crest, to allow the major drawdown to commence on October 1st. However, the heavy rains we have been experiencing recently has made that goal something of a challenge, when roughly 97 square miles (62,000 acres) of watershed land drain to Wonder Lake.

On October 1st, the dam sluice gates were opened further, and will continue to be opened more as conditions allow.

Normally, at this time of year, the average volume of streamflow coming down Nippersink Creek is usually around 20 cubic feet per second (as measured by the USGS stream gage at Thompson Road , which can be viewed at https://tinyurl.com/y8vezzhl) That flow volume equals roughly 150 gallons per second.

As of Wednesday evening (October 2), the flow coming into the lake from Nippersink Creek is at roughly 1,000 cubic feet per second, or 7,500 gallons per second. Additional streamflow not included in these totals also comes into Wonder Lake from Galt Creek, Troy Creek, and Merchant Creek.

Needless to say, the rain needs to stop and flows into the lake need to decrease before any appreciable changes in lake levels will be noticed. It is important to note that the sluice gates that allow the lake level to be lowered can only be opened in a gradual, controlled manner to avoid flooding out areas downstream of the lake.

So for now, all we can do is have patience and hope for the weather to cooperate. Updates will be posted as conditions change.

In March of 2019, the MPOA began announcing that a lake drawdown would be conducted in October of 2019. This will be the first Wonder Lake drawdown since 2007, and is being done in order to allow some needed concrete patching to be done to the Wonder Lake Dam spillway, as well as to complete some mechanical dredging in an area of West Bay that could not be accessed by the hydraulic dredge.

Wonder Lake will remain at its normal elevation through Labor Day and well into mid-September. Depending recent rainfall and predicted weather patterns in mid-to-late September, the lake will slowly be lowered to spillway height so the actual drawdown can begin as planned by October 1.

Starting October 1st, 2019, the actual lake drawdown will begin, with lake levels beginning to drop more quickly. It is estimated that the lake level will be lowered by at least two feet below the dam spillway elevation, but the actual extent of the drawdown needed will not be determined until the upper portion of the upstream dam spillway face is exposed, and the extent of concrete patching required can be visually observed.

It is hoped that all of the spillway repairs and dredging work can be completed by the end of October, so that the lake can begin re-filling. Obviously, the length of time for the lake to refill will be subject to how much rainfall occurs this fall, but based on the last drawdown, the lake should be back to normal pool for winter sports activities.

Given this timeframe, lakefront landowners should be planning accordingly for removing their in-lake equipment for the winter. 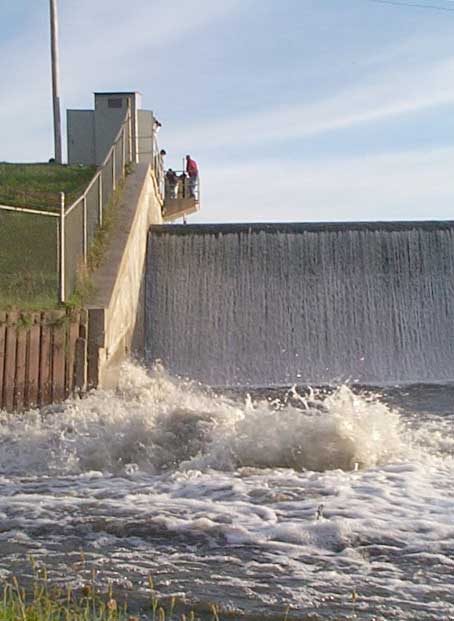