1.    Dredging for the 2014 construction season ended on November 11, 2014.  The early on-set of sub-freezing weather was beginning to impact mechanical parts on the dredge and booster pump, resulting in the need to shut down operations.  They will be spending next week doing a partial demobilization of the equipment, all of which will remain on-site over the winter, so they can resume work as soon as weather / lake conditions allow in Spring 2015.

2.    While the dredge will be moved onto shore for the winter, the booster pump and dredge pipeline will remain in-lake in West Bay over the winter.  While any portions of the pipeline that will remain above the water level will be flagged by the contractor, winter lake users are strongly advised to avoid these areas in West Bay.

3.    Overall the dredge made good progress this year, considering the shallow water depths and rocky material they were encountering in West Bay.  While their movements may have at times seemed somewhat erratic, much of the work done was simply to create sufficient depth to allow the dredge to operate, and for the dredge pipeline to be moved without dragging it across the lake bottom.

4.    The dredging operations / volumes are being documented by GPS equipment on the dredge, as well as by land surveyors, to ensure that all of the areas slated for dredging under the current contract will be satisfactorily completed.

5.    It is recognized that the dredging next year will likely take much of the 2015 construction season. The MPOA will be working with the dredging contractor to develop a plan for 2015 dredging operations, so that inconveniences to lake users are kept to a minimum.

6.    The annual dam inspection of the Wonder Lake Dam and the SDF site was successfully completed on October 10, 2014.  In addition to the MPOA Professional Engineer (P.E.), two P.E.’s from the Illinois Department of Natural Resources – Office of Water Resources participated.

7.    The Open House at the Wonder Lake Sediment Drying Facility (SDF) site on October 11, 2014 had a turn-out of over 100 visitors, including both MPOA members and neighbors of the SDF.  Thanks to Dick Hilton, Dennis Gallo, Kelly Nelson, Kathy Blum, Mark Nichols, Bob Schell, and others for volunteering their time.

8.    The Illinois Lake Management Association annual conference will be held February 19 - 21, 2015 at Northern Illinois University in DeKalb. MPOA Directors and Members are strongly encouraged to attend, as a wide variety of lake topics are covered. Information can be found at www.ilma-lakes.org. 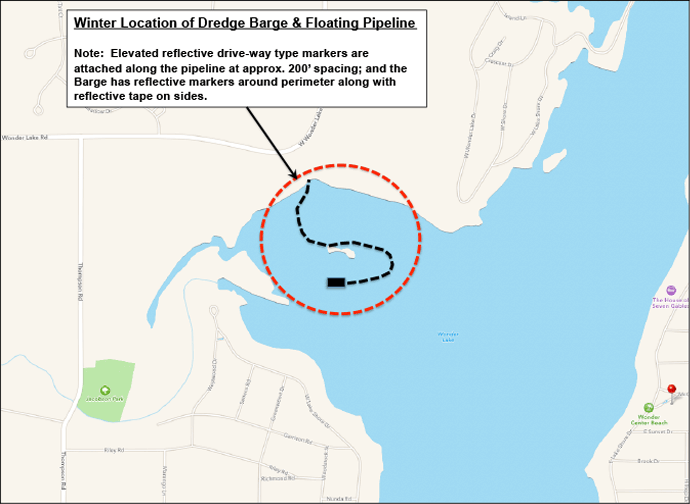