As the lake dredging progresses, a number of questions have been raised about the project.

As indicated earlier, the dredging contractor chose to begin work in the West Bay, primarily to keep out of the main body of the lake for the 2014 boating season.  The dredging contractor has completed most of the dredging along the south shore of West Bay.  The most accurate way for those landowners to determine when they can put their piers back in is to communicate with the marinas, as Tom and Scott are in regular contact with the dredge operator, and have the most up-to-date information.

Not unexpectedly, the dredging contractor has run into some challenging conditions, as West Bay is where the gravel and rocks delivered by Nippersink Creek first come to rest in the lake.  Much of the material being dredged and pumped from this area includes sand, gravel, and rocks up to the size of a baseball.  While screens prevent larger rocks from being dredged, the material that does pass through the dredge pump is definitely hard on the equipment.

The dredging contractor is set up to staff two (2) eight hour shifts per day; however, this does not mean the dredge is running continuously the entire time, as there are maintenance requirements; the need to re-position the dredge; and other factors.

It is in the best interest of the dredging contractor to work as fast and efficiently as possible, as they are not being paid on an hourly basis, but on a volume basis.  The dredge has a very sophisticated GPS system incorporated on it, which helps track the exact path and extent of dredging operations.  This information, combined with additional verification by a professional land surveyor of the actual water depths achieved in areas that have been dredged, help determine the volume of sediment actually dredged, and in turn, the amount of the MPOA payout due to the dredging contractor.  All of the payout requests from the dredging contractor are then reviewed and approved by the MPOA dredging consultant.

So if you happen to witness the dredge temporarily inactive, rest assured that the dredging contractor has a strong financial interest in keeping the sediment moving towards the SDF site.

Another question that has arisen involves the depth to which the West Bay will be dredged.  Over the years, a number of various dredging studies were developed, with a wide range of costs and approaches.  It is understood that one of those studies may have suggested dredging a portion of the West Bay to a 35 foot depth, to allow it to serve as a sediment trap for future sediment inflows from Nippersink Creek.   However, that approach, if pursued, would have been exceptionally expensive, and would have faced significant logistical and regulatory hurdles.

Feedback from the Wonder Lake community determined that if lake restoration was to be pursued, a “More Affordable” plan would need to be developed, which resulted in the current dredging project.  Information provided to the Village of Wonder Lake and McHenry County in support of creation of the $ 5.9 million Special Service Area (SSA) indicated:

The “More Affordable” Plan will create a minimum four to six foot water depth in:
The south portion of the West Bay (where Nippersink Creek flows into the lake);
The South Bay;
The three coves in the White Oaks Bay subdivision;
The cove in Lookout Point, and between the east central shoreline and Wickline Island / O’Brien Shoals

The diagram below shows the areas of West Bay (bounded in  red ) currently proposed / funded for dredging, as well as a cross-section of the dredge area.  The cross-section shows the normal water level of the lake in  blue ; the accumulated sediment in  grey , and the limits of the proposed / funded dredging depth in  red . On average, three (3) to five (5) feet of accumulated sediment will be removed from West Bay.

The current dredging plan did include a “Bid Alternate” in the bidding process that, if authorized by the MPOA, would have removed an additional 3 to 5 feet of sediment from a portion of West Bay to serve as a deeper sediment trap.  The area that would have been dredged under the “Bid Alternate” is on the cross-section bounded in  green . 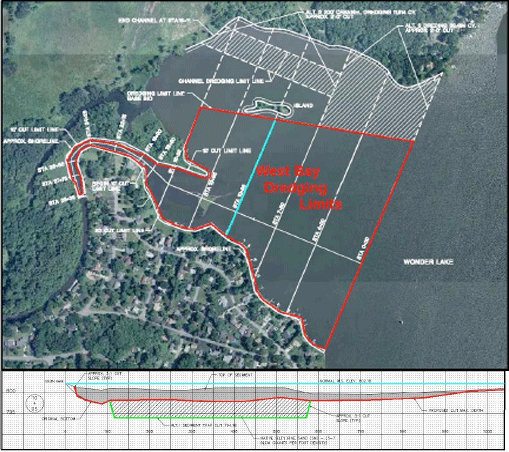 However, due to all of the unexpected costs incurred by the MPOA in dealing with lawsuits and the unfounded allegations raised about sediment contamination, there is not enough SSA funding left to pursue the “Bid Alternate” sediment trap.

However, tax-deductible donations are now being made to the MPOA dredging fund.  If sufficient donations are made to the fund before the dredging contractor finishes the work they are currently funded to complete, there is a chance that a deeper sediment trap could be implemented in this phase.

It should be noted that as part of the current design of the Sediment Drying Facility, a smaller cell was constructed that could be used for future maintenance dredging of the Nippersink Creek inlet, in the event a deeper sediment trap is not feasible with the current funding.