1. The MPOA has received the report from the MPOA structural engineer detailing their recommendations on the location and extent of needed surface concrete repairs on the vertical sidewalls of the dam spillway. Interestingly, while most of the wingwall surface on the east side of the spillway has significantly deteriorated and needs extensive repair, the west wingwall surface only needs some spot repairs.

2. The Wingwall report was passed onto the MPOA wingwall repair contractor who, based on the report, has selected the specific concrete repair product to be used. They have also tentatively scheduled the repair work to begin around the 22nd of August, with the repair work estimated to take one to two weeks, depending on weather conditions.

3. All the permits for the Merchant Creek footbridge have been received, and the bridge has been ordered. A plan is being developed to conduct a pre-bid meeting for contractors with the equipment and expertise to install the four helical screw bridge abutments.

4. Preliminary discussions continue with a soil vendor who has expressed an interest in buying the dried sediment from the lake dredging project.

5. An issue with a lakefront landowner whose boat lift encroached onto a neighboring property frontage has been successfully resolved by the boat lift being relocated to a proper location.

6. Concerns have been raised about boat traffic in the channel west of Yacht Club Island coming too close to the White Oaks Bay beach. The Lake Use Commission has taken this issue under advisement.

7. A proposal to conduct our annual state required inspections of the dam and Sediment Drying Facility this fall has been received, with an inspection date to be determined for mid-October.

8. Another bit of Wonder Lake history on the following page, as well as in color, at: https://mpldlocalhistory.blog/2021/01/30/mchenry-countys-man-made-miracle/

In February 1929 it was announced that the company of Jones & Winter would be building a giant man-made lake. When finished it would be the second largest lake in Northern Illinois. Jones & Winter was a company from Chicago, that specialized in summer resorts. They announced the name of the development would be Wonder Lake. The lake would offer the best place for water activities, such as boating, swimming, and fishing. They would also develop land for summer and year-round residences. However, what would be so impressive about the lake would be its size, as nothing like this had been done in the Mid-West. 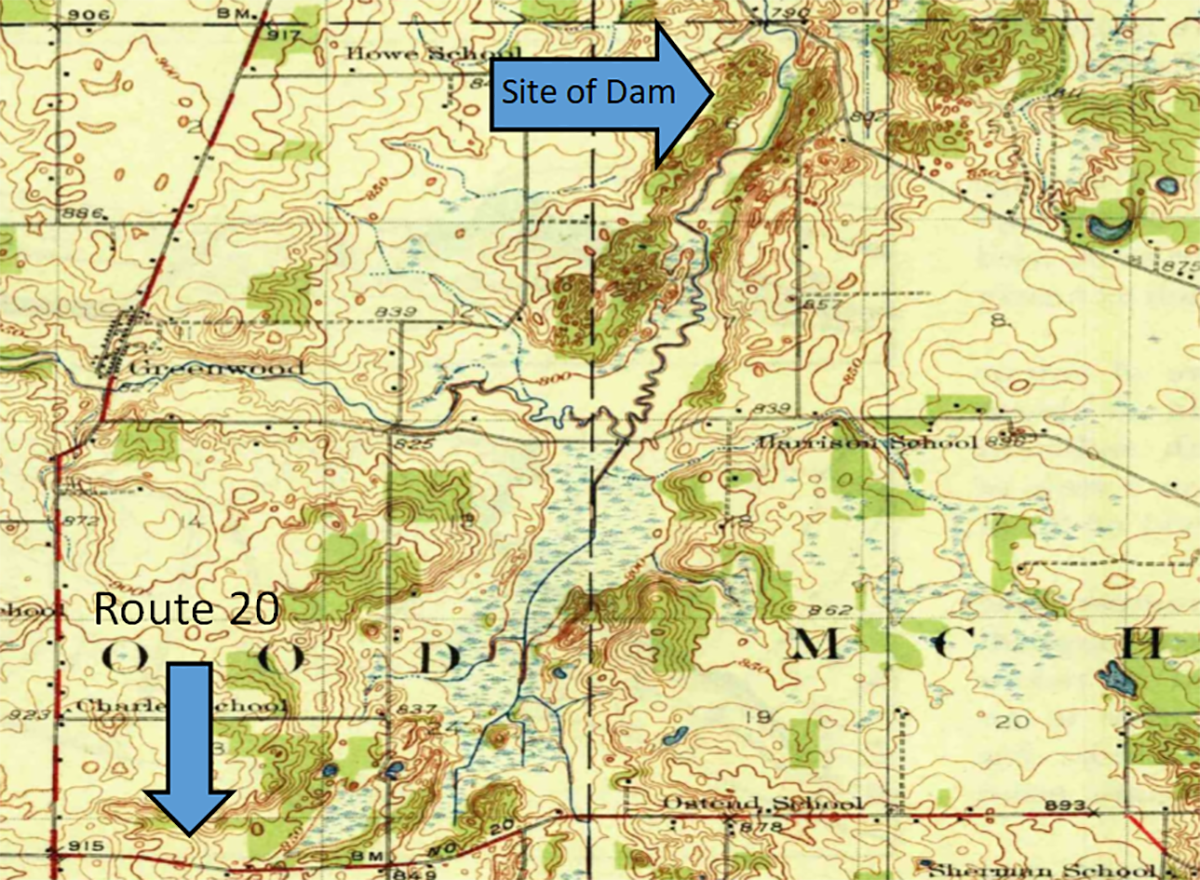 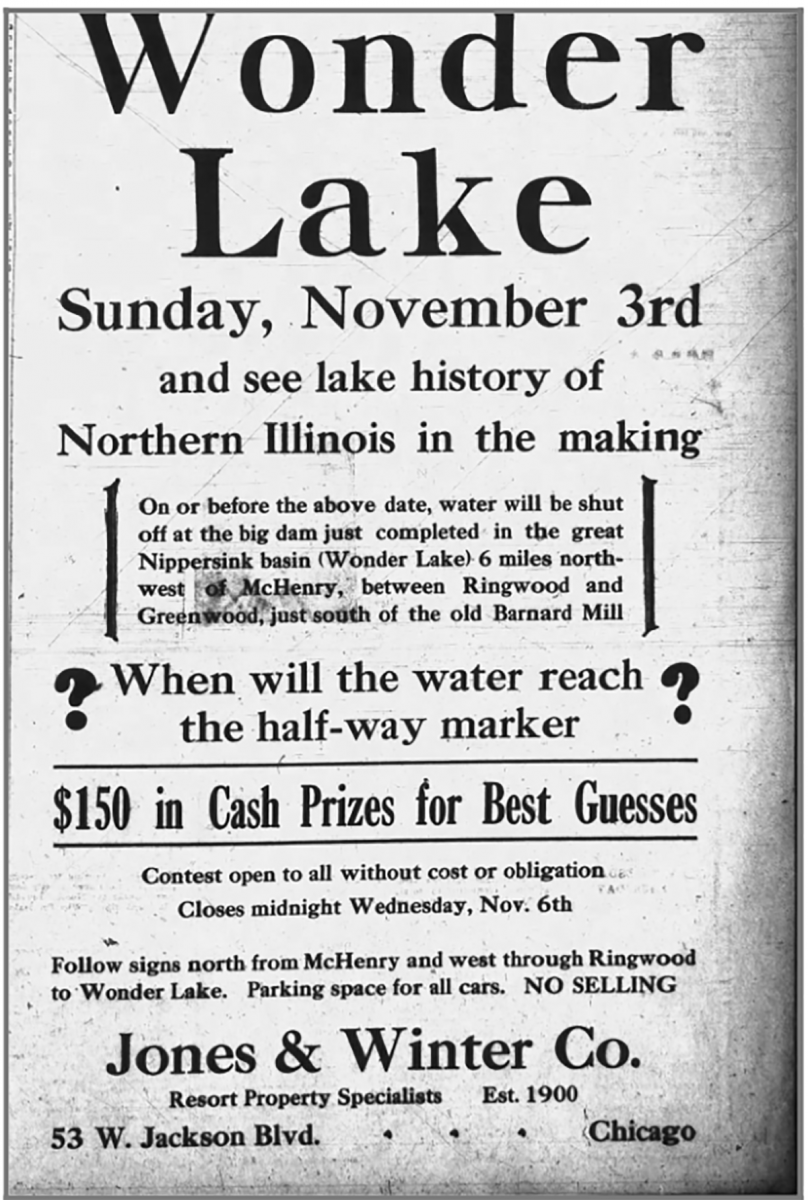 Jones & Winter purchased 1642 acres of farmland with 750 acres set up to contain the lake itself. Farms were purchased from the following families: the Howes, Harrisons, Merchants, Barnards, Halls, Klintworths, Garrisons, and Hancocks. The lake itself would mainly sit on former Garrison, Hancock, and Harrison farms. Wonder Lake would be run from the Nippersink to the north starting at the area right by the Barnard Mill landmark. It would run about three and three-fourths miles south until a quarter mile north of Route 20, Route 120 today. It would be about 1 mile across from east and west, and depending on the location, would be from seven to 15 feet deep. It would also feature, three wooded islands. The Nippersink Creek, and several other smaller streams, would feed the lake and a dam would hold the water back. In the construction of Wonder Lake the dam would be the key component because, with the dam, the lake couldn’t happen.

The dam, when built, would keep the water 800 feet above sea level and would be quite the feat of engineering. It would be constructed by the Whitewater Bridge Company from Whitewater, Wisconsin and engineered by Randolph-Perkins company from Crystal Lake. The dam measured over 1000 feet long and dropped down 25 feet and measured in thickness of two and 1/2 feet thick to one foot thick. The spill way, the part of the dam the controls where the water goes downstream, measured 150 feet long. The rest of the dam consisted of an enormous fill of clay. The construction started in June and was finished in October. The top had a walkway for inspections and flash boards were included at the top to help adjust the depth of the lake if desired.

In September, 15,000 black bass were put into the lake. This was hoped to be the nucleus of what would make Wonder Lake a fisherman’s paradise. The dam was completed on October 15, 1929, and to much fanfare, they sealed the dam and the lake started to fill. Jones & Winter held on a contest on November 3 to see when the lake would finish filling. The cash prize was $100 to the person who came closest to guessing when the water hit a predetermined line. The project ended up costing Jones & Winter about half a million dollars, which they anticipated making back in selling the waterfront property. Known as the Wonder Lake Syndicate, Wonder Lake quickly grew into one of the more desirable summer communities in the state.